When the teacher returned the French school work, Christopher had to wait a long time for his turn. The teacher always started with the best and Christopher knew that unfortunately he was not one of them. This time, too, it was just a “pass” and the teacher made a thoughtful face as he handed him back the notebook. He said, “If you don’t have a gift for languages, you have to practice a little more!”
Inwardly, Christopher had to agree with him, because unlike other subjects, he didn’t enjoy learning vocabulary and grammar at all. He knew from his older sister, who had studied abroad for a year, how important it was to master foreign languages.
Christopher was not among the better ones in English either. Although he had already tried to prepare himself better for school with the help of a flashcard (learning tip “Benjamins & Werner’s Learning Machine,” Lernende Schule, issue 4), this dry practice was not his cup of tea.
Since he spent the afternoon at his grandmother’s as well today, sitting in her kitchen and writing the correction of his schoolwork, he complained to her about his problems with language learning. The grandmother spoke French, which she had learned at school, quite well and badly, but conversation was out of the question. 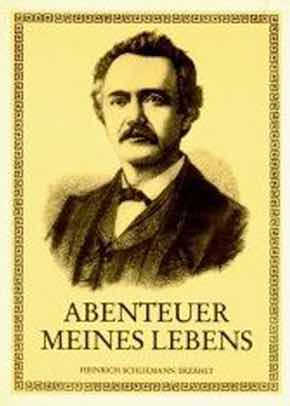 When he finished correcting her, he prepared for tomorrow’s history test. History was one of Christopher’s favorite subjects. He was especially fascinated by the great explorers. The test material concerned Greek history, especially the conquest of Troy.
“To be an explorer like Heinrich Schliemann, that would be great!” he said.
“But he was a linguistic genius and is said to have spoken English, French, Dutch, Spanish, of course Greek, Latin and whatnot in addition to German,” the grandmother replied.
“There΄s no such thing!” protested Christopher. “He must have been studying on that forever!”
“No!” said the grandmother, “he learned almost all the languages in no time, sometimes even in a few months! Wait, I have his life story on the shelf.”
The grandmother got up and brought him the already somewhat yellowed volume, “Adventures of My Life.” “I’m giving it to you!”
“Thank you! I’ll study this right away, because it goes well with my exam.”
In the book Christopher also found the description of how the famous explorer had learned English: “So I threw myself with particular diligence into the study of English, and in doing so necessity made me discover a method which greatly facilitates the learning of any language. This simple method consists, first of all, in reading aloud a great deal, making no translations, taking an hour every day, always writing down elaborations on subjects that interest us, improving them under the supervision of the teacher, learning them by heart and reciting them in the next lesson (…). In order to acquire good pronunciation as soon as possible, I regularly attended services in the English church twice on Sundays, and while listening to the sermon, I quietly repeated every word of it for myself.”
Christopher read with amazement that Schliemann often memorized as many as twenty pages of a book and recited them to his teachers. The explorer then applied this method to French, Dutch, Italian, and Portuguese, which is said to have taken no more than six weeks before he could speak and write each of these languages fluently.
Can this method work?
Apart from great diligence and an unconditional will to learn languages, the secret of this method probably lies in the memorization of texts. New words and concepts are learned at the same time in a concrete sentence context, which makes them easier to memorize than in long word lists.
In addition to vocabulary, each text also contains the rules of grammar, which at the same time allows you to practice how to use words and grammar in this foreign language.
If you want to transfer this method to our modern times, you can try it with the help of selected song texts, which can be found in the booklets of music CDs or on the Internet. Reading along, singing along and learning by heart can be done without translation at first, rather one should try to understand the meaning and the action of the text first from the speech melody. Only then should one approach a translation of the text, whereby a “literal” translation may sometimes sound strange, but reflects the sentence structure of the foreign language. Then, when one has mastered perhaps twenty-five or more such texts by heart, one will have a good command of the grammar of the language in addition to the numerous vocabulary words.