Travel preparations for the brain

Sebastian’s favorite subject was physics and he had become interested in it immediately when invitations for a lecture at the adult education center had been distributed at school by the physics teacher. A famous scientist from a university in the capital was to give a lecture on “Why is the sky blue?”.
Since there was nothing special on TV that evening, he had told his mother about it and asked her to take him there and pick him up again. She was delighted with her son’s interest and immediately agreed, even though it would mean Sebastian would be much later in bed. “For once,” she said, “maybe you can use something for school!”
It was almost eleven o’clock when Sebastian got home from the lecture with his mother, so he fell right into bed to get enough sleep for the next day of school.
“How was the lecture last night?” asked Sebastian’s father at breakfast the next morning.
“Went like this,” Sebastian replied.
“And what was it about?”
“About the history of optics.”
“Was he interesting?”
“It was,” Sebastian remained taciturn.
“Won’t you tell me a little about it after dinner tonight? My school days were so long ago, and I’d like to see what I remember!”
“All right! After dinner.”

Sebastian and his father sat down on the couch in the living room after dinner with dessert.
“And why is the sky blue?” his father asked expectantly.
“Because the light is scattered … by the air. But in reality, light is not blue, it contains all colors,” Sebastian recalled what he had learned long ago in physics class. “The professor also explained that you can see this best in a rainbow, because it splits the light … The sky is bluest in a South American city, Rio, Rio …”
“Rio de Janeira,” his father added.
“Right! And the fact that the sky is sometimes very bright in our country has to do with air pollution. Actually, the sky is black, the professor said!”
His father listened to him attentively, but noticed that his son did not understand everything and had already forgotten a lot in the meantime. Above all the connection between the angle of the light irradiation and the color of the light had remained incomprehensible to Sebastian in this lecture, 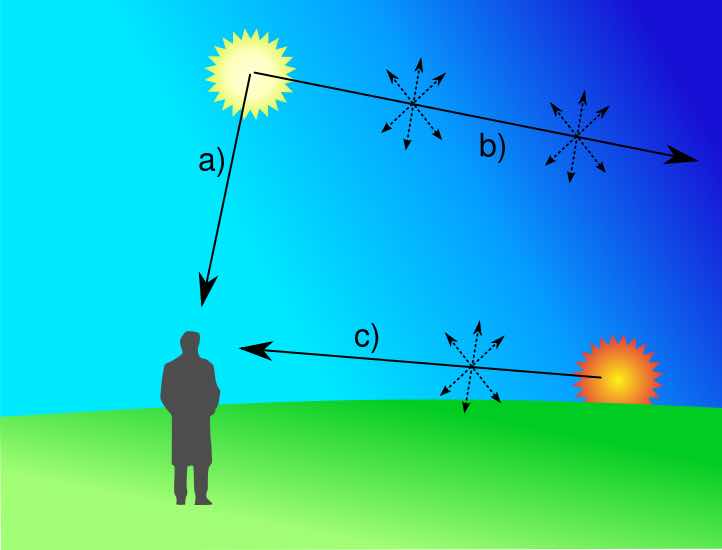 Finally, the two sat down at Sebastian’s computer and searched the Internet for the exact explanations and connections. The two were so engrossed that they even ignored their mother’s question as to whether they would like to have a second helping with dessert. Sebastian printed out some Internet pages to study them more closely.
“Now I realize some of the things I heard yesterday,” Sebastian said when they turned off the computer after more than an hour.
“When I go to a seminar or lecture, I study what I’m going to hear there very carefully beforehand,” his father advised him. “A lot of things are already familiar to me then, and not only do I follow along more easily, but I can also concentrate better because I don’t have to strain so much with understanding new things.”
Some of you may be wondering why this is so.
It has to do with the fact that our brains lay out everything we know in the form of a large network that is more densely woven in some places and less densely woven in others. For example, if you receive new information during a lecture on a subject about which you still know very little, most of it enters your head but doesn’t stick anywhere, whereas on a subject where you already know a great deal, a lot of it sticks. So the human brain works paradoxically in a certain sense: where there is already a lot, a lot can still be added, where there is still little and there would still be a lot of space, rather little goes in.
Therefore, it is a very good idea to prepare for a lecture by getting some preliminary information in books or on the Internet. If one builds up at least a coarse-meshed net of previous knowledge, then more will stick during the lecture. Such a network of prior knowledge offers anchor points for the new information, but also many details can only be perceived at all through such preparation. If one encounters ambiguities during the preparation, then one can already think of questions to ask the presenters.
Such preparation for a lecture is similar to planning a trip, because if you want to learn more about a country, its history and its people, you also study brochures, books or travel guides in preparation.