Hans-Jürgen had the feeling that the letters were beginning to blur before his eyes. For half an hour now, he had been sitting in front of the story that the German teacher had assigned to be read. Hans-Jürgen straightened up and tried to remember the beginning of the text. Shaking his head, he turned the page back and read:
“In the whole history of man, no chapter is more instructive to heart and mind than the annals of his aberrations. In every great crime there was a proportionate force in motion. When the secret game …”
Had he already read that? It seemed to him that although he read the words somehow, at the same time his thoughts ran more between the lines.
“If the secret play of the power of desire hides itself in the duller light of ordinary affects, in the state of violent passion it becomes all the more prominent, more violent, louder: the finer human scientist, who knows how much … human scientist, who knows how much one may actually reckon on the mechanics of ordinary free will and how far …”
No, there was no point. “Today I just can’t concentrate!” muttered Hans-Jürgen, putting the worn Reclam notebook aside. “This strange language … something is wrong today!”
Yet Hans-Jürgen never had trouble with complicated texts, and actually he liked to read.

We have already mentioned in an earlier learning tip some reasons why one cannot concentrate on one’s work and looked for the reasons in an “unkempt” workplace and other external circumstances that are a hindrance in a task. However, there are also reasons that are not “external” but “internal” to the person.
Attention – as one can also say instead of concentration – is a performance of different parts of our brain that can only work successfully when they work together properly. Thus, parts of the brain that are responsible for planning are connected with those parts that are responsible for general alertness and arousal, which then again interact with those parts that are finally supposed to take care of information intake. These processes must be coordinated with each other, because if one part of the brain does not play along, then what happens to Hans-Jürgen when he reads the story can happen.
Most of the time, our attention is controlled quite automatically, so that we are not even aware that we are concentrating now. Only in the case of external disturbance – for example, noise or other unusual perceptions – do we become aware that our thoughts are “distracted” by something.
We do not become aware of this so quickly in the case of internal disturbances, such as feelings or other internal excitements, which also ensure that the interaction of the various parts of the brain for concentration does not function. Thus, inner disturbances such as hunger or thirst only become directly noticeable after attention has already decreased long before. 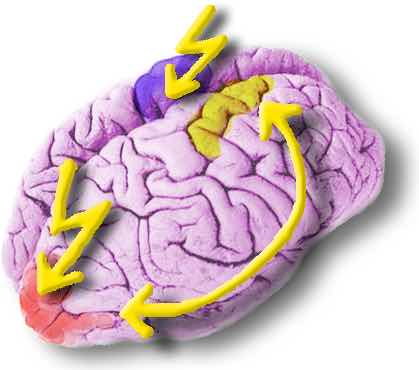 Similarly, when we are plagued by worries, they make themselves heard in an area of the brain involved in concentration long before we consciously start worrying. Many concentration problems are related to long past experiences. For example, Hans-Jürgen’s memory of a failed German school assignment on a literary text can interfere with reading concentration. However, a general low mood, which sometimes occurs in adolescents, may also be responsible for the lack of concentration, because our brain reacts earlier than we “notice”.
However, it is not as easy to influence internal disturbances as it is with most external ones, because you can turn off a radio or go to a quieter place to work. But how do you turn off these internal processes? Some of these disturbances we can prevent by eating and drinking on time, getting enough sleep, or taking study breaks; for others, sometimes “concentration exercises” before starting work can help us gather our thoughts and help our brain parts tune up. Three simple exercises are described here:
Close your two eyes and imagine that someone has placed an orange on your head, which must not fall down for one minute.
Stand by an open window and draw circles as large as possible with both arms at a slow pace for one minute.
Take a large sheet of paper and draw lying eights on it for one minute.
Such exercises before learning work can help to tune in oneself and one’s brain and, if used regularly, also lead to the brain adjusting more quickly and almost “automatically” to the following concentrated work.

The text Hans-Jürgen had to read is the beginning of the story “Der Verbrecher aus verlorener Ehre” by Friedrich Schiller, who wrote this “true story” in 1786, around the same time as his famous drama “Die Räuber”.