Alfons had just eaten lunch – his favorite dish was chicken schnitzel with potato salad – and therefore even passed on the dessert his mother offered him. He was really full and retreated to his room, where lots of homework was waiting for him.
He took the math homework first, because he had to do it in any case, since the teacher had announced that he would collect the exercise books tomorrow. Among the homework problems was a particularly difficult one, and Alfons flipped through the table of contents of his math textbook to find the complicated formula needed to solve it. As he read the legend to the formula, he felt as if the letters and numbers were somehow out of focus. He also had to strain to keep his eyes on the lines as he read. It was that feeling he had in the evening before falling asleep, when he desperately wanted to finish reading the chapter of a book, but he was actually already much too tired to do so. Sometimes the letters began to blur and he had to strain hard and squint his eyes to continue reading. Several times, while reading in bed in the evening, the book had slipped out of his hand, once even falling to the floor, where the sound had woken him up again. Why did Alfons have such difficulty concentrating on his work?

In humans, there is a kind of inner clock, a clock that controls waking and sleeping times – it has approximately a twenty-four-hour beat. In addition to this “master clock,” however, there are other clocks that control various bodily functions, such as metabolism, body temperature, oxygen consumption, but also learning ability. Some clocks follow a six-hour rhythm, others an even shorter one. These internal clocks are mainly controlled from within, i.e. from the brain, but daylight or food intake, for example, also play an important role. They partly change the length of the phases or provide for a fine tuning in the sense of a strengthening or weakening. Everyone knows that the consumption of coffee, for example, can produce a performance high, at least in the short term. But as researchers have discovered, certain foods, such as those very high in fat, can cause a performance low.

So what can Alfons do? First of all, he should observe himself as closely as possible for a few days, at which times of the day school work is easier for him and at which times he has to work harder. He should do this best in writing by entering these times in a kind of timetable. He should then use the best times of day for intensive learning and work phases, while he should use the “weak” learning times for relaxation and not so demanding activities (When did Alfons last tidy his room?).
Once you have found your personal daily rhythm, you should try to do your work at fixed times. There are often problems with fixed dates like appointments, visiting friends or the flute lessons, but here you should be flexible and at least pay attention to the performance highs and lows during the rest of the time. Such a learning plan, which one subsequently adheres to reasonably firmly, forms an important basis for learning success. 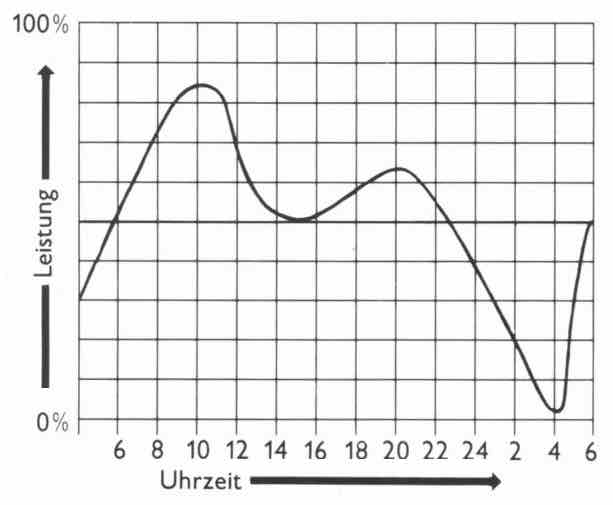 There are some fairly well established times of day with highs and lows that apply to most people and therefore form a kind of rule of thumb that you can follow once before you know your own times – in the figure you can see very much such an average curve, in which the level of performance over the course of the day is plotted. In general, the time after noon is considered to be a particularly weak period, exactly the one in which Alfonso wanted to do his tasks. Most people have their performance peak in the morning from 9:00 to 11:00 and a second in the afternoon from 17:00 to 19:00. So this would be the ideal time for homework. However, most students do their homework exactly between 1:00 p.m. and 3:00 p.m., which is their peak performance time.

However, since everyone is different, there are also more or less small deviations in the times, whereby one can only find out one’s own rhythm through close observation over a longer period of time. The school should also take these daily rhythms into consideration and schedule the important subjects in times of high performance. By the way, animals also have such internal clocks – they usually follow them much more directly than humans. Observe carefully when your dog, guinea pig, hamster or cat retires for a short nap and at what times of the day or night they are particularly active.