The formula for learning success

When Philipp came home from school at noon, he was already thinking about the tennis match he had arranged to play with his best friend Fabian at five o’clock. Shaking her head, his mother watched as he wolfed down lunch.
“Take your time!” she admonished.
“I still have so much to learn! No thanks, no dessert!” and he was off to his room, where he immediately set about his homework. The two math examples were quickly calculated and even the onset exercise for English was no real problem. “That leaves me three hours for the history exam,” he thought. Philipp didn’t like learning subjects very much, because there were so many things to cram, which one never needed again in life!
“Yes, yes!” he sighed, “Seneca was right with his ‘Non vitae, sed scolae discimus!'”
Once when his mother came to check on him, Philip was hunched over his history book, studying Cicero’s speeches in the Roman Senate. Almost until half past four o’clock he read through again and again the chapters which the teacher had indicated as the material for the examination.
Since Philip knew about his weakness in these so-called learning subjects, he sacrificed a particularly large amount of time to them, especially towards the end of school. While he had no problems in mathematics and also in languages and received good grades, he rarely had more than a C and sometimes even only a D in the learning subjects. His parents did not reproach him for this, because they saw that he spent many hours with his books. 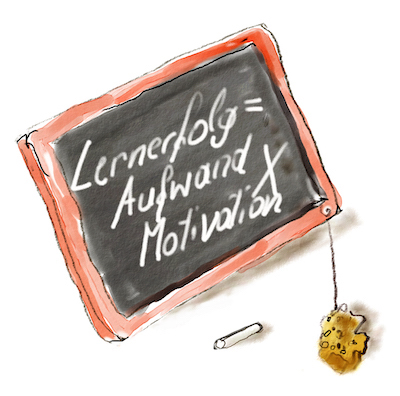 This is the experience of many students, who learn easily and quickly for some subjects, but achieve little success in other subjects despite spending a lot of time learning. Why this is so can be expressed in a simple formula: the formula of learning success.
The learning success of a student consists of two parts
the effort he puts into learning, i.e. primarily the time spent, his effort, his diligence, his skills and his previous knowledge,
and the inner drive, i.e. the joy he takes in learning, the fun he has, the interest he shows in the subject matter – psychologists refer to this in summary as motivation.
This is certainly easy to understand for everyone and we probably wouldn’t have had to write a learning tip about it, but “the catch” in the matter comes first: Psychologists – these are scientists who have also been studying human learning in detail for more than a hundred years – have determined that these two components of the formula are factors of a multiplication! And if Philipp has been paying attention in mathematics, he knows that the product of two factors goes towards zero when one of the two factors goes towards zero.
If Philipp sits many hours over his books, but the material interests him very little or not at all, so he sees no real sense in learning it now, then the learning success will remain small despite his large time expenditure.
Likewise, if he is very interested in playing the guitar or another musical instrument and would love to make music, but does not spend any time at all on attending a music school or practicing, then it will be of little use to him. In this case, he will probably spend his life turning on the MP3 player rather than actively making music himself.
Philipp should therefore try to find a concrete goal for his learning, which can be the inner driving background for his learning. Before each learning Philipp would have to ask itself thus, for which he can use this learning material perhaps nevertheless sometime. If one thinks carefully, then one finds for most learning contents some application possibility.
And if you can’t do that, then maybe you should motivate yourself by surprising others with your knowledge. Maybe you can even annoy some teachers with it 😉

Translated, “Non vitae, sed scolae discimus!‘” means: “We learn not for life but for school!” This saying by Lucius Annaeus Seneca the Younger, who was an educator and advisor to the Roman Emperor Nero, is usually quoted the other way around and therefore incorrectly.