Send the learning material on its way …

When Alexandra sat for her computer science exam, she was asked to list the twelve most important components of a modern computer. She had studied diligently at home, but she hated such lists, because even if you repeated everything twenty times, you were sure to forget some of it during the exam due to excitement and time pressure. And when calculating the grade, each answer counted as one point!

She remembered a TV show where a memory artist could repeat thirty words called out to him by the audience, then repeat them in the same order. But even better, he could also do it in the reverse order and finally stunned the audience when he could also say what the twenty-third, eleventh or seventeenth word had been. Alexandra pondered what trick the man might have used, ranging from a hidden voice recorder to a small transmitter over which an assistant behind the stage read the answers to him, but the answers came far too quickly for that to have worked.

It happens again and again that one has to learn lists and enumerations for exams, the components of which do not make sense together or are chained in a logical order. This also applies to the words that the audience shouted out to the memory artist. He used a trick for this, which can also be used as a student: you send such a list on a “journey”.

An example of such a journey is Benjamin’s way to school, which consists of individual “stations” to which he had once assigned a number.
Benjamin first walks across the Adlerplatz (1), where there is a fountain made of granite (2 Brunnen). He passes the bakery (3 Bäcker) where he buys his daily school snack (4). Then he passes by the post office (5), opposite which is the bus stop with a bench (6). He gets on the bus (7), which first crosses the Taubenmarkt (8), then passes the Sparkasse (9) and the theater (10) and goes up a steep street (11) where his former sports club (12) is located. Although his journey to school does not end here, these twelve first stops will suffice as an example. It is important that these travel stops are firmly stored in the brain as anchors with which one can link the components of the list to be learned. So it’s best to take paths that you could walk “in your sleep.” 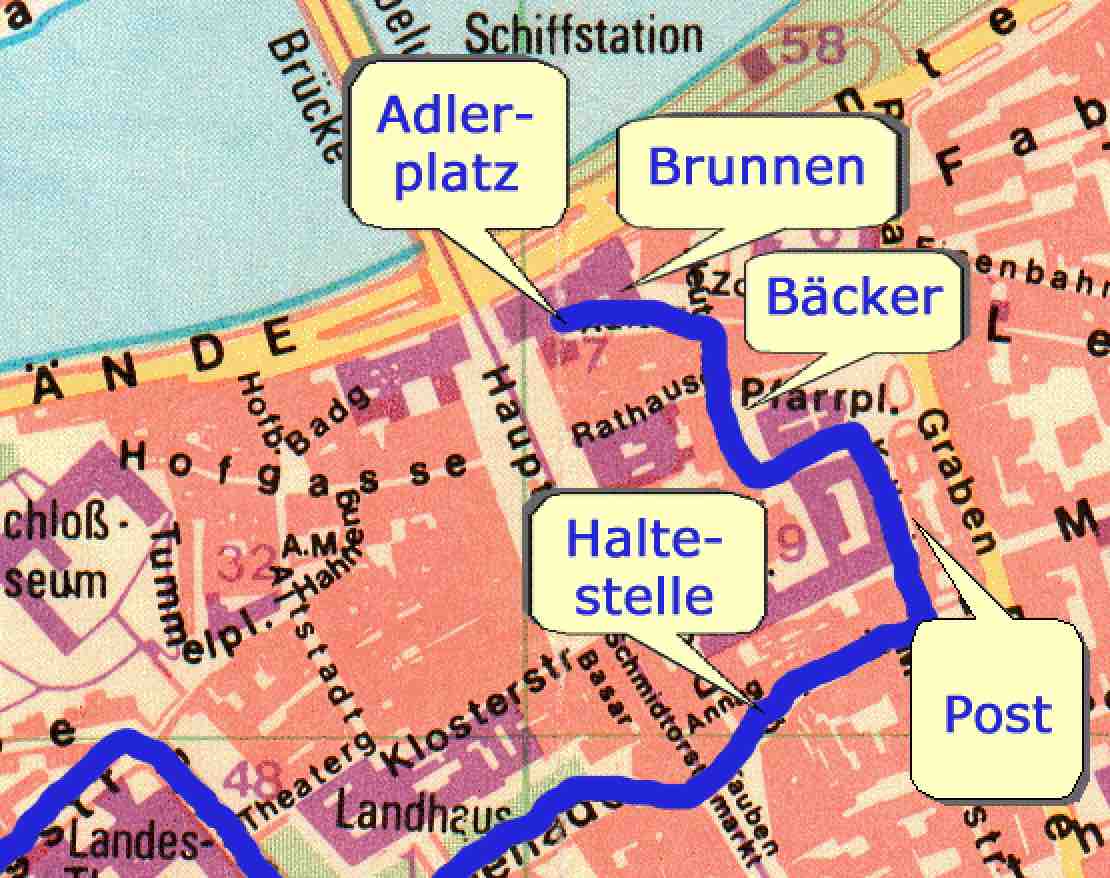 In order to memorize the list of computer components “keyboard, main memory, mouse, interfaces with cables, main memory, modem card, housing with fan, graphics card, hard disk, processor, monitor and floppy disk drive”, one station at a time is linked to a term of the list by a “picture” that is as memorable as possible. This could look like this:

I see an eagle pecking away at a keyboard in the square in front of our house, throwing the keys into the well where our drinking water is mainly stored. In front of the bakery, a hungry mouse sits waiting for me to get my snack, a sliced roll filled with cable salad. At the post office, a couple of workers carry a huge box with SPEICHER written on it. On the bench sits a modern dressed lady holding her ticket in her hand. When the bus arrives, it turns into a snail shell with a huge fan, into which the lady is blown. At the pigeon market, the pigeons sitting there flutter up in fright and drop the graphic cards they usually hold in their beaks. At the next stop, a man firmly cleans the granite slab on which “Allgemeine Sparkasse” is engraved. At the theater, the bus driver makes short work of everyone and puts them all on the steep road, where the passengers have to lug a large heavy screen up. Finally arriving at the sports club, everyone runs to the throwing circle to hurl the discus.

Even though this story seems much more extensive than a mere list of the components of a computer, the sometimes unfamiliar images are easier to remember and can also be reproduced in the desired order. It is important that one thinks up the story with its pictures oneself, because only then this connection with the stations of the journey takes place. This “itinerary” can be used again and again, of course, but there should be a time gap between each use so that nothing gets mixed up.
One should work out several such paths – longer and shorter ones – so that one can send further enumerations on journeys during examinations.