Pack the material in lumps!

“Please list the founding states of the Council of Europe,” the geography teacher said to Martin. He didn’t think twice and started: “Belgium, Denmark, France, … Great Britain, … Ireland, … Italy, …”
Here his flow of speech faltered and he looked helplessly around the class.
“Luxembourg” whispered his bench neighbor Patrick and Martin repeated:
“Luxembourg and …”
“Netherlands,” Patrick whispered.
“Netherlands!”
“And is that all of them?” the teacher inquired.
“Yes … no …,” Martin hesitated.
“There are two missing! How many are there in total?”
“Ten,” Martin recalled.
“But that was only eight!” the teacher pointed out, adding, “Norway and Sweden.”

“It’s a bummer to cram lists like that,” Martin commented to Patrick during the break, “you can repeat them a thousand times, you’ll forget one of the stupid states!” With this, Martin addresses something that many students know, whereby it is especially difficult when there is no logical connection between the components of such lists to be learned. In our example, we are dealing with ten country names, alphabetically ordered one below the other in the textbook, which is obviously the only order. While not knowing these ten countries does not necessarily represent an educational gap, and every teacher knows that most school knowledge evaporates after a week at the latest, from a student’s point of view such a memory gap nevertheless often messes up a good grade. What can be done about it?

There is the peculiarity of the human memory that it can remember on average about seven things at once for a short period of time, which also plays an important role in memorization and practice. If there are more than seven things, then the surplus ones quickly disappear from the brain’s coils or are quickly forgotten, like the remaining states that Martin was only able to name in the geography exam with the help of his bench neighbor Patrick. In our example it is added that these country names were crammed by Martin in alphabetical order, thus after a pattern, which had nothing to do with the event “establishment of the Council of Europe”.
How can one deal with longer lists in a meaningful way while learning? One possibility is to simply practice them much longer and more persistently, but that costs time and students are known to lack it the most. However, you can even take advantage of the “rule of seven” of memory by breaking a long list into seven or even fewer groups. In our example, you would have to remember only three groups of countries to which you logically combine these ten countries:
– The first group are the Benelux countries, also known from other contexts, i.e. Belgium, the Netherlands and Luxembourg.
– The second group are the three Scandinavian countries Denmark, Norway and Sweden, whereby the fourth country Finland does not come into question because it was under the influence of Russia immediately after the 2nd World War.
– Finally, the third group is formed by the three European victorious countries, France, Italy and Great Britain with Northern Ireland, where the affiliation of Northern Ireland “reminds” us of the tenth country, Ireland, which was also among the founding nations. 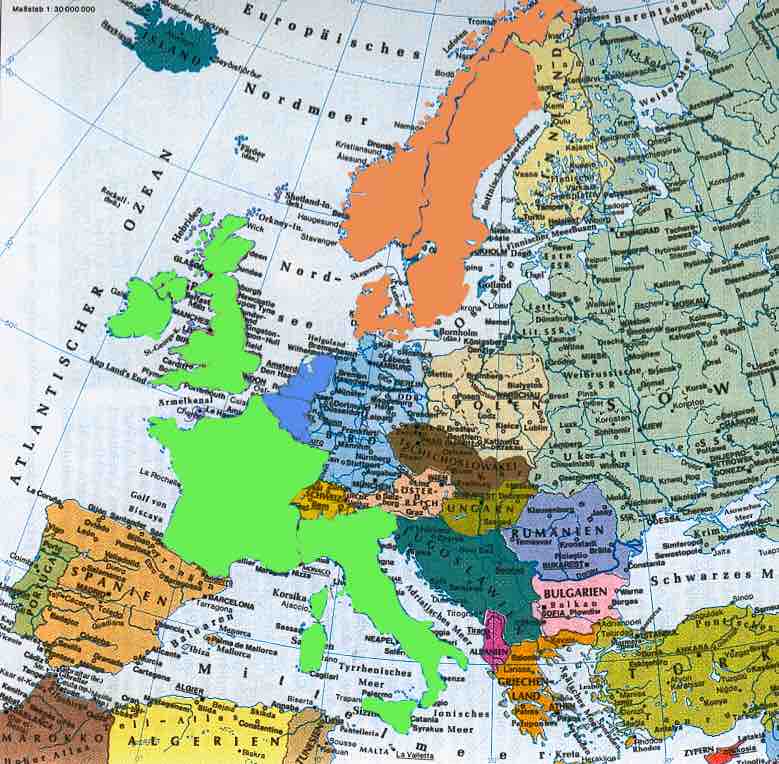 Therefore, when learning, we are no longer dealing with ten alphabetically ordered words, but three meaningfully grouped blocks of countries, which also helps one to better understand the political context of the time. Martin should therefore have learned only three founding blocks: Benelux, Scandinavia, victorious powers. He would then have answered the exam roughly as we summarized them in the three blocks and would not have forgotten any country in the process. When learning, it might have been useful to visually represent these three groups of countries by a drawing on a map of Europe, as we did on the picture.
One can learn also much longer enumerations with this “lump formation “*), by packing always 7 times 7 times 7 terms together to lumps, which one learns individually and thus after kind of a logical tree arranged in the memory stores and in the same way again brings out, however there will hardly be so long lists, which one must learn by heart for an examination.

*) In the psychology of learning, the combination of several concepts into one concept is called chunking, which means nothing else than “forming lumps”.