Learning with the computer

While looking for a new learning tip for the “Learning School”, Werner – that’s the one on the top left – came across a pedagogical journal in which people wrote vehemently against the use of the computer in learning for school. It said, for example: “The computer is only used by students for playing games”, “You don’t learn anything from computer work”, “The computer makes you forget how to write”, “The computer is addictive”. Werner then showed Benjamin – that’s the one on the top right – this magazine and asked if these claims were true and if he, who does more than half of his work for school on the computer, also learns nothing from it. Thereupon the following conversation developed: 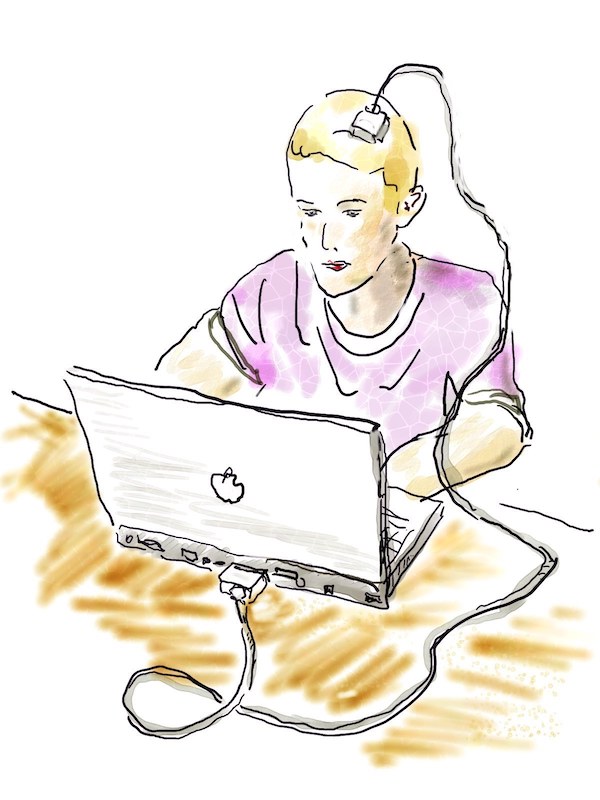 Werner: What do you use the computer for when you learn?
Benjamin: For almost all subjects, from religion to math.
Werner: How do you do that exactly?
Benjamin: I create a folder at the beginning of the school year, e.g. school year 2002, in which a separate folder is then stored for each subject, containing the actual documents.
Werner: Which documents are those?
Benjamin: Pages from the Internet that I download, transcripts in geography or history that I type into the computer. I often copy keywords from CD-ROM dictionaries into these transcripts, and sometimes I scan a text from a book so that I can edit it. Such lexicons are very practical – but you have to be careful that you approach the matter in a targeted way and don’t get bogged down because there are such pretty films or animations.
Werner: What is particularly important here?
Benjamin: In addition to order, it’s important to give the documents meaningful titles so that people know what’s in them. If necessary, you can use a program to search the entire hard drive for a keyword.
Werner: But isn’t the whole thing particularly time-consuming, e.g. the typing?
Benjamin: That is already learning work! And I have a clean and clear transcript to study from. It’s important to be able to type well, with 8 or 10 fingers, and partly blindly; but I learned that when I got my first computer. I print out parts of the material on index cards, which I then carry around with me as a flashcard and repeat regularly.
Werner: What is the computer most useful for?
Benjamin: For correcting! Once you’ve written the text and revised it, you have everything in the right form right away when you’re correcting. But you’re also more pedantic, because when correcting is so easy, you do it more often.
Werner: Where does the computer help the most?
Benjamin: With presentations. Today, I couldn’t imagine doing them without a computer. It starts with the keyword collection that I create after studying encyclopedias. By moving the text blocks in the document, I sketch out an initial structure. I then print it out and hang it on the bulletin board so that I can add to it at any time. Sometimes I also do the concept on the poster first, because you have more overview there than on the computer screen. According to this concept, I collect material from the Internet, from CD-ROMs, but also from books, from which I usually scan in pictures.
Werner: And what else?
Benjamin: I then work the collected documents into the concept one by one, and it is important to document the work by, for example, putting the documents used into a folder called “WORKED” so that one can see the progress. Also, I always work on only one copy of the original so that I can undo changes at any time.
Werner: And the paper itself?
Benjamin: Since we have a beamer at school, I usually do a visually supported presentation with my laptop, although that only works if you have a lot of time to prepare! Usually I just make overhead transparencies, which of course are also drawn and written with the computer.
Werner: Do you also use learning programs?
Benjamin: Not anymore! I used to have some for learning vocabulary, but they were boring in the long run. They’re interesting at the beginning, but then there’s too much repetition. I prefer the flashcard!
Werner: What is particularly practical about learning on the computer?
Benjamin: You can use spelling programs to check how a word is spelled. In English, for example, you can translate every word and have it pronounced correctly. In math, I check functions with a small graphing program to see if the solution is correct. Drawing by hand would be quite tedious. In general, I like drawing on the computer, because with sketches I can present the material more clearly!
Werner: Do you have the feeling that you can learn faster with the computer?
Benjamin: Not really, because a computer also requires a certain amount of “maintenance”, i.e. installing and trying out programs, repairing them when they crash. Writing or looking things up and searching is faster, of course. It probably takes the same amount of time overall. Unfortunately, there is still no cable with which you can connect the computer to your head and transfer the knowledge from the hard disk to memory …