It was the sixth and last lesson and Angela was staring out through the window onto the schoolyard. Already late in December, the first snowflakes danced against the dull gray sky. The heat rising from the heater made the air shimmer and added an extra movement to the dance of the flakes. Suddenly, Angela just felt more tired and she had trouble keeping her eyes open. More than half of the students in the overheated classroom felt the same way, and the teacher was also longing for the lesson to end, as she too was having a hard time getting through the planned material for this lesson.
“One of the most interesting features of medieval European art is the columned figure. These statues are incorporated into the columns behind them and are completely subordinate to the architectural system of the portal. I’ll pass you some pictures of portals of French cathedrals …”
The teacher handed some postcards to the students in the first row of benches.
“As you can see from these examples, these figures have a stenciled simplicity, the facial expression is often rigid. To address the faithful more directly, …”
At that moment, Markus nudged Angela to pass her the postcard. She took a bored look at it and passed the picture to Manuela, who was also struggling with fatigue. “Christmas,” she yawned, “it’s Christmas Eve in a week and I still don’t have any presents for my parents!”
In a sort of stupor, Angela and also most of her classmates spent the rest of this art education lesson. Outside the school gate, they were greeted by bone-chilling cold. Angela took a few deep breaths and after only a few steps next to her friend Manuela, with whom she had shared most of the way to school, they were both wide awake again. They discussed animatedly what they should put under the Christmas tree for their family. 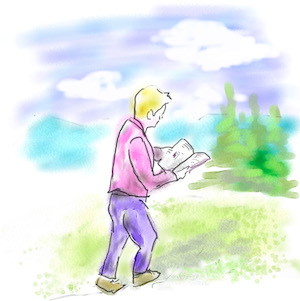 Each of us can easily put ourselves in Angela’s shoes, and everyone has felt this way at some time or another, whether at school, at a lecture, or even at home while studying. You feel sleepy and have the feeling that everything is somehow sluggish and slower than usual.
It has been proven in scientific studies that our brain – thinking, learning, being attentive is now for the most part the work of the brain – can work better or only at all if it is supplied with sufficient oxygen. Oxygen is pumped into the lungs when we breathe, from where it reaches our brain via the blood (the red blood cells are the transporters for this), where it makes the chemical and electrical processes that we call perception or thinking possible in the first place. When there is a lack of oxygen, the working capacity of our brain decreases, while it is increased again when we supply oxygen to our brain again. This is exactly what happened to Angela when she stepped out of the oxygen-deprived, overheated classroom into the fresh air outside the school.
We’ve already shown in another learning tip that breaks are important when learning, and that you can help your brain cope better with the subject matter by doing simple movement exercises like the windmill or slow motion. But it’s not just during breaks that you should give your brain a few servings of oxygen. Scientific research has shown that the body consumes approximately

We can learn from this that it is not particularly beneficial to always sit when learning – and that is, after all, a form of thinking. Especially not if we sink down more and more under the “pressure of the material” and only breathe very shallowly, i.e. only allow very little oxygen to reach our brain with every breath. So if you have to sit while studying, you should at least change position frequently, take a deep breath, stand up briefly or stretch. Your upper body should be completely upright when sitting so that you pump as much air as possible into your lungs with every breath.
Since we can rarely go for a long run while thinking or learning at the same time – our concentration would suffer greatly if we did so, since we would always have to be careful not to crash into a tree or trip over the neighbor’s cat – going for a walk is particularly suitable for reviewing learning material. If you have your vocabulary or other material in a flashcard file, for example, take a stack and go “learning while walking”!

Note: Aristotle, a famous philosopher in ancient Greece, gave his lectures by walking with his students. Actors learn their lines best by walking. When people are thinking about something in a very concentrated way, they often walk around the room quite unconsciously. After all, our bodies are not “built” by nature to sit for long periods of time! But we don’t need to tell that to a pupil or student, do we?