The chemistry teacher scratched behind his right ear as usual and let his eyes wander over the heads of the 4a students, frowning. All of them made themselves as small as possible at the age of fourteen. Dominik also ducked his head and avoided raising his eyes, but he still felt the teacher’s gaze on him.
“Dominik!”
Slowly Dominik raised his head and when he caught sight of the teacher’s stern face, small flashes of lightning shot out from his eyes, rushing towards him and setting fire to the chemistry book that was quickly held up for protection. Yellowish smoke emanated from the teacher’s ears in small clouds, filling the entire class in an instant.
“Dominik!” sounded a second time. At this, the chemistry teacher’s head turned into a glass flask in which a green liquid was bubbling, and the fingers of the teacher’s outstretched hand formed into huge pipettes1 that slowly moved toward him, extinguishing the now blazing book with the green liquid. Dominik dropped the now dripping but still smoking book. The fingers, transformed into pipettes, slowly began to suck it into the glass flask …
“No!” he screamed, “I don’t want to be tested!”
Drenched in sweat, he straightened up in bed and flailed his hands, boxing his indignantly growling teddy bear to the floor … 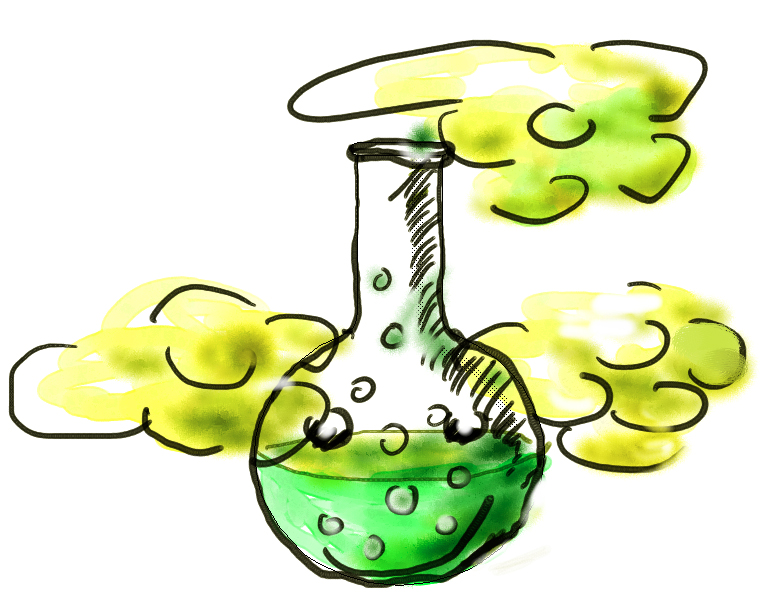 In four weeks Dominik was to take a repeat chemistry exam that would decide whether he could advance to the next grade or would have to repeat the fourth. So far he hadn’t learned anything, but now it was high time to finally start. Fortunately, his teacher had given him a piece of paper with some tips on how to prepare for the exam. Dominik took out this piece of paper right in the morning after that nightmare and studied it carefully.
You need to know what all you are supposed to learn! So that wasn’t difficult – he got his chemistry book and his chemistry notebook out of the cabinet and put them on the desk in front of him.
Get an overview and distribute the material over the available time! Dominik flipped through the book – it had 14 chapters. So if he worked through one chapter a day, he could be through with all the material in two weeks and still have enough time to review everything.
Start with an easy area of material! That wasn’t difficult either; after all, the chapter on environmental pollution caused by too many detergents had already interested him back then. But he didn’t need to study too much there, because he had memorized most of it permanently.
It is better to learn four hours spread over the day than four hours in a row! During the vacations it was no problem to spread the learning time over the whole day. Only on weekends would he eliminate the afternoon hours, but schedule three hours in the morning, because he wanted to go to the soccer field.
Make a time and work schedule and check off what you have already learned! Dominik took his calendar and crossed off two hours each morning and afternoon in which he wanted to study. That had to be enough. He assigned the chapters to the 14 days, estimating only half a day for the easy ones, but half a day more for the hard ones.
Ask questions of the material and answer them! The teacher had given him the test papers and a list of questions he had asked during the school year. There were also a few control questions at the end of most of the chapters in the chemistry book. He would try to answer those using the book on a piece of paper.

Find a study partner with whom you can talk about the material! Dominik was the only one in the class who had a repeat exam from chemistry, but his friend Claudio had offered to quiz him here and there. Besides, he could help him if he didn’t understand something.
You can only learn what you have understood! For this, Dominik had borrowed the book “Chemistry for Everyone” from the school library, in which most things were explained more simply than in the textbook. In addition, there was his friend Claudio …
Reward yourself for a successful day of learning! This was not difficult, because he wanted to go to the swimming pool with his friends after studying in nice weather, or “pull in” a video or two.
There were a few other tips in there that he wanted to take to heart when he had a chance:
Always repeat the next day what you learned the day before before continuing to study!
After three days, repeat all the material you have already learned!
After each learning unit, plan a short break in which you leave your workstation and get some fresh air!
Sometimes practice standing or walking if you feel that your thoughts are stuck!
On the last two days before the exam you should only repeat more!
Immediately before the exam it is best to watch a talk show on TV, according to a scientific study this is the best way to relax before an exam!
When Dominik got up from his desk, he already felt a little relieved, because he knew that with this planning he should actually make it. He took a chocolate bar out of the fridge, ate it with relish, and got right to work on his first study session …