When the father opened the apartment door to his children, who were coming home late from afternoon classes, his daughter Christine greeted him with a “hello,” while Christopher strolled by wordlessly, hurriedly took off his shoes, and disappeared into his room.
“What’s gotten into him?” the father asked.
“He got into a fight with our math teacher. What exactly it was about, I don’t know! Please ask him yourself!” replied Christine. “I’m hungry already!”
“I think dinner will be ready soon! I was in Mom’s kitchen earlier, and it already smelled really good.”
“Fine, I’ll just go change and see if I can help Mom a little more.”
Christine went into the kitchen to greet her mother. There she met Peter, her younger brother, who was putting the cutlery on the kitchen table with the plates.
“Hi mom! Hello Peter! You’re busy already!”
“Greetings, Christine. Dinner will be ready in a minute. Please help Peter set the table and cut up the white bread,” her mother asked.
“Hi!” her brother replied, “I’m already done setting the table.”
A little later, the mother called the family to the table. They had to wait for Christopher, who kept being late.
“Nice of you to do us the honor of dining with us,” Christine mocked.
Christopher muttered something under his breath that we’d rather not put on paper here. The mother shook her head wordlessly, while the father replied, “You should study etiquette sometime!”
“What’s that?” asked Christine.
“Let’s eat once now,” replied the father, “because it also says in etiquette that you shouldn’t talk with your mouth full. Meal time!” 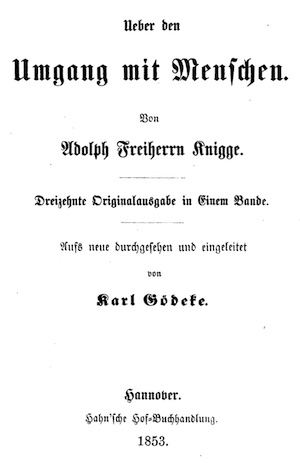 After dinner, the father sat down with his children in the living room and told them that Baron Adolph Franz Friedrich Ludwig Knigge was a writer who became famous more than two hundred years ago for his book “On the Manners of Men.” In it, Knigge described, among other things, how tact and politeness can save one from many disappointments when dealing with other people. This book was later turned into a general guide to good manners, collecting rules of etiquette for all kinds of occasions.
“But that’s mostly for grown-ups,” Christopher objected.
“No,” replied his father, “rules of etiquette apply to young people, too.”
“Even for students?” asked Christine.
“Especially at school, and especially towards one’s teachers, it’s important to display appropriate behavior. If you like, there’s a kind of student etiquette that applies.”
“And what does it say?” asked Christopher.
“You know that in school it’s not just how well you do, it’s how you get along with your teachers. So as an older person, you should always treat them with a certain respect in order to get along with them.”
“What exactly should you do about that?” asked Christine.
“You should never forget that teachers are also normal people and sometimes have a bad day like their students. You should respect that and be polite even when they are angry or unfair, for example. Many people are happy to be addressed by name and title, so this is important to some teachers as well. Teachers often consider their own subject to be particularly important and are offended if you don’t do the same as a student. So, if only out of self-interest, you should show some interest in the class by listening carefully and participating.”
“But if history doesn’t interest me at all …”
“Then you should show that to the teacher as little as possible, but at least be friendly and accept him as a person. Every teacher is more than his subject and it doesn’t hurt to smile at him once in a friendly way. Do you think he enjoys looking at all those bored student faces?”
Christopher shook his head.
“Today Hannes squeaked with his plastic bottle and Peter nibbled on his snack,” Christine added, “Mrs. Schneider got pretty upset about that!”
“As a student, you should also never criticize teachers in front of the whole class, contradict them or even mock them, even if they have made a mistake. As a student, you should also admit your own mistakes and not blame everything on the teacher. Put yourself in their shoes. As a student, you have certain duties just like teachers, so it’s a matter of courtesy to do all your work on time and also to always be on time in class.”
“And is there also an etiquette for teachers?” asked Peter.
Everyone laughed.