Sebastian came home from school and threw his school bag into the corner. After a long illness that forced him to stay home for almost two weeks and miss classes, he had received a long list of assignments from his teacher to make up for the missed lessons.
He showed the note to his mother and she shook her head, “By when are you supposed to have made up all this?”
“By yesterday, the teacher said!” he replied despondently.
Then, as Sebastian sat in his room studying the list, he became despondent. “I’ll never make it!” he sighed, pulling out the math book. Four chapters his classmates had gone through in school in his absence. And that with his weakness in this subject.
And then there was the German! He had to read and interpret an entire drama by Schiller, because that would be the material for his next school assignment, which was due the following week.
Not to mention the many pages from the English textbook!
Sebastian was a diligent student who fulfilled all his tasks conscientiously, but what is too much is too much! More to get rid of the feeling of doing nothing at all, he picked up the Schiller and started reading. Nevertheless, he had the feeling that nothing was going on, but that the mountain of material in front of him was only getting bigger. 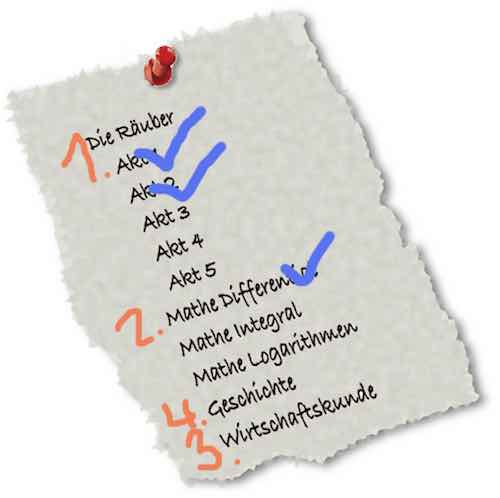 In the evening he told his father about the long list. He listened to him attentively and said, “Well, let’s see what all you have to do.”
Sebastian dragged the pile of books and the list from his room.
“O.k., is that all?” asked the father.
Sebastian nodded.
“Then let’s put all the assignments side by side once!”
When that was done, the father asked, “What’s the most urgent?”
“Everything!”
“When do you have the German school work on ‘Die Räuber’?”
“Next Tuesday! So in three days!”
“When do you have the history exam?”
“In two weeks.”
“How many chapters are there to make up from math?”
“Four chapters.”
“Well,” nodded the father, “we’ll spread them out over the coming week after schoolwork!”
One by one, the two of them went through the various tasks to be done, turning the books and notebooks over several times. Finally, they were all in the order in which they were to be done. Then the father took some yellow sticky notes (?) and provided them with numbers, which he stuck on and into the individual learning materials.
At the very beginning and marked with the number 1 was the inconspicuous Reclam booklet with Schiller’s drama.
“Well, why don’t you start reading the drama today!” the father said.
“But it’s soooooo long! It has five acts!”
“Then read through the beginning at least once today – you can still manage one act today, can’t you? And I’ll look in my old theater guide to see if there’s a useful synopsis in there. You can read that beforehand so you know roughly what happens in the play and what’s important.”

That long evening – Sebastian went to bed an hour later than usual – he had already read through the first two acts, in addition to the synopsis that his father had brought him as a copy. And he himself had found a concise interpretation of the main characters’ personalities on a university website, which made it easier for him to understand the plot better, since the terse language of the dialogues meant that their meaning was not always entirely clear.
“It’s almost like a detective story,” he thought as he fell asleep.

If some people believe that such systematic planning of learning means losing some of the already scarce time, then this is a fundamental error. Managers in business often spend up to one tenth of their time organizing tasks to be completed and breaking them down into subtasks.
In principle, organizing and planning the work for the school is a comparable management task, even though here it is not a matter of assigning most of the tasks to other people, but here the head of the school enterprise is at the same time the only employee – a “Ego-Comp”, so to speak 😉
From a psychological point of view, such planning helps to make a seemingly unmanageable amount of material into a manageable one. This is so important because the unknown is always experienced as more threatening than the known.
However, laying out and ordering not only creates manageability of the actual amount of work, but also an order that at least gives the feeling of starting with the most urgent/at the right end.
Another aid – especially with very extensive tasks – is to break them down into subtasks, as Sebastian did with the material for the math school paper. Smaller tasks can be completed in less time and each checkmark on the “to-do list” (this is how managers often refer to the lists of tasks to be completed in a day or week) gives you the good feeling of having accomplished something again.

Management refers to the direction and leadership of a company. Like many business expressions, the word entered the German vocabulary via English, derived from the Latin “manum agere”, which means “to lead by the hand”.